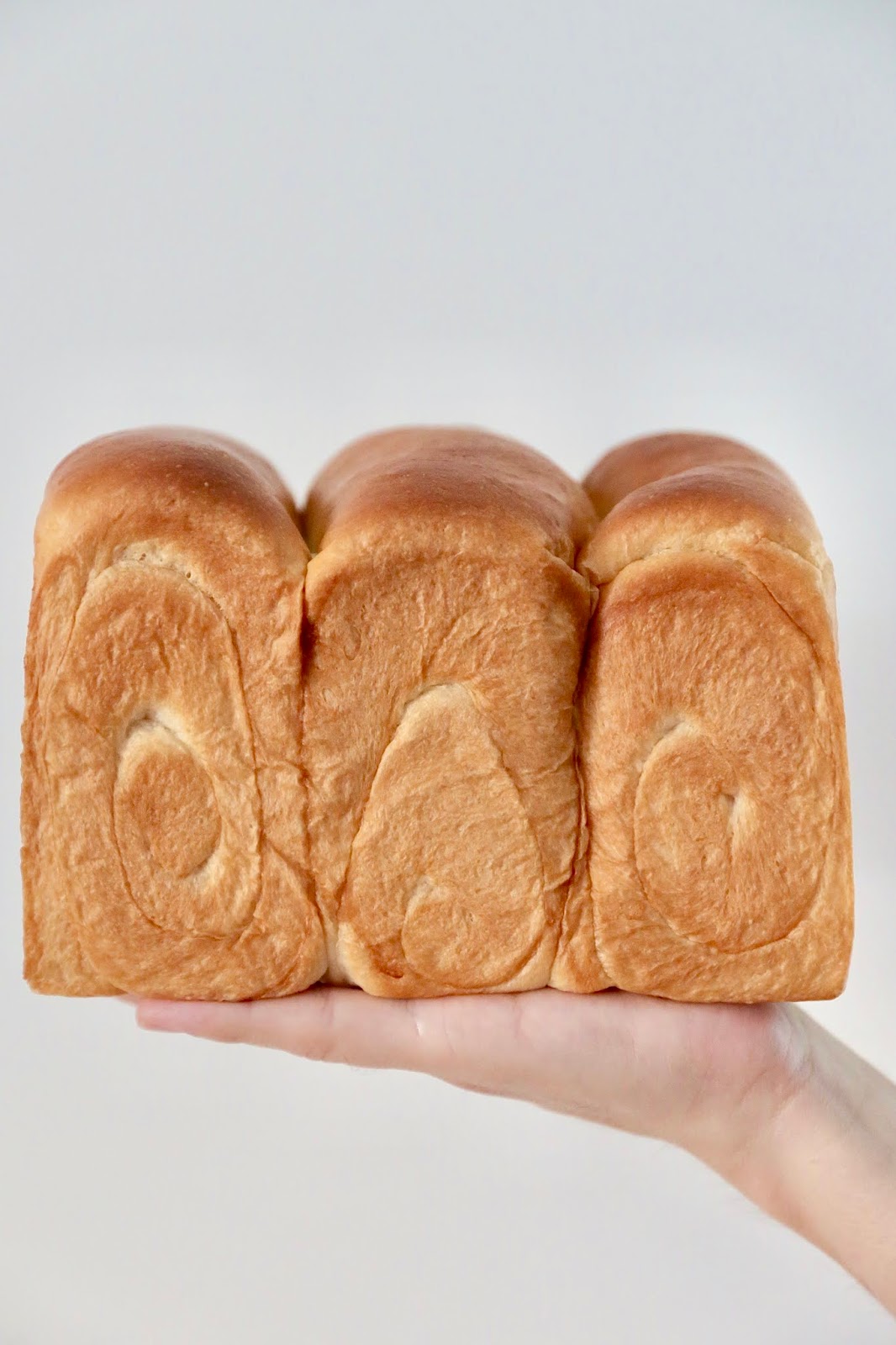 The second method I tried in making this Shokupan is yudane method. This method is similar to its more popular relative, Tangzhong. Tangzhong requires the flour and liquid to be boiled until it forms a paste that is then cooled to room temperature before using. The ratio of flour and water is typically 1:5.

With Yudane, the ratio varies a bit, but at most I’ve seen 1:1.5 and instead of boiling the two together, the water for yudane has to be boiling and you pour it on the flour and mix it to form a dough. The dough is then refrigerated overnight or at least set aside for a few hours. The longer it sits, the more flavor it will develop. The idea behind these two method is to create a gelatinized mixture from the gluten as you mix it with boiling water, creating a chewy bread. 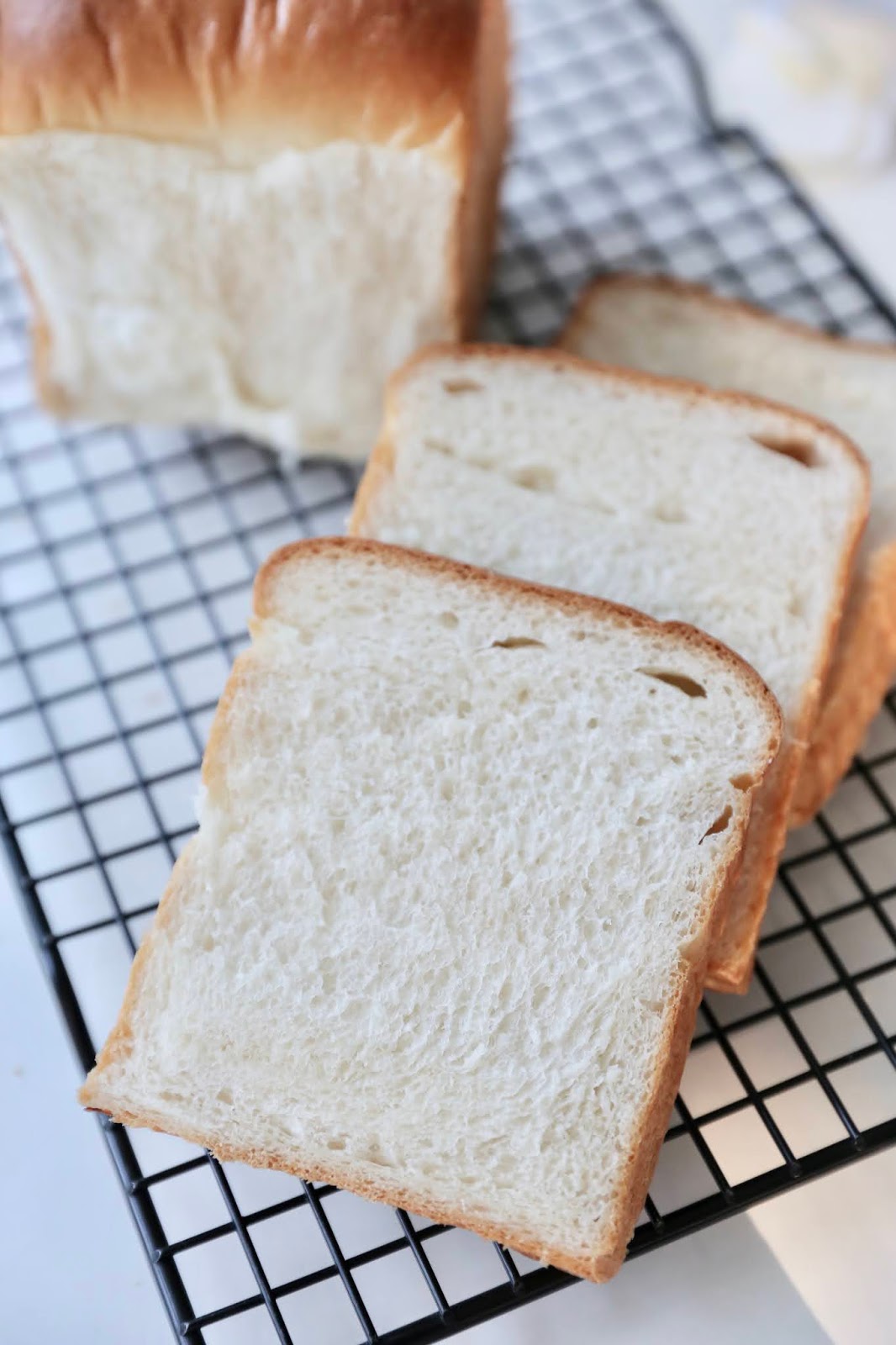 Yudane is not a pre-ferment, and hence, does not use yeast in the starter dough. The yeast is added in the main dough . Technically, you can use regular amount of yeast as the straight-dough method, but in this recipe, the yeast used is much less (still more than poolish since it doesn’t require pre-fermenting). Less yeast means longer fermenting and proofing time, but less (if any) yeasty flavor, better texture and flavor. By any means, you could increase the amount of yeast a bit to make the process faster.

I experimented with different bakers’ percentage of the yudane to see what works best. The final recipe I post here is very similar to the poolish one. The difference is just the hydration level of the starter dough. The dough made with yudane is just like the dough from straight-dough method, whereas poolish is a bit wet. And since there is no pre-fermenting involved, it will take slightly longer to reach the elastic stage compared to poolish. This dough can be adapted easily for regular buns (with or without egg) since it is very pliable.

The first time I made the yudane, I honestly could not tell the difference from the previous poolish method since I made it two days after. This week, I made them back to back four days in a row to test the theory of the final result, making it total of 8 loaves :D. I am happy to say that the two methods indeed resulted in different texture, proving the theory right. Poolish is lighter, fluffy and while yudane is equally soft and fluffy, it is as predicted, has chewy texture when you bite into it, in a pleasant way. Another thing to mention is that, the bread with yudane method, with the same amount of sugar, is slightly sweeter than poolish as the boiling water convert some of the starch into sugar. My husband prefers the chewiness, but I prefer the lighter version, though I must say they are both VERY good and it is very hard to pick one or the other.

I encourage you to try both methods to see which one you like better. I promise, no matter which version you make, it will be really good no matter what.

You can also use this recipe with this method for any kind of bread; dinner rolls, buns, pull-apart bread, either plain or filled.

Note:
1. Yudane dough can be difficult to mix with the main dough. I use bread machine and it has no problem mixing the two directly, but alternatively, you can break the yudane into small pieces and mix it with the milk and cream first before adding the rest of the ingredients

2. To make the square version using pullman-loaf pan with the lid, use the amount in (), proof until it is about 1.5-2cm lower than the rim to give it room to rise in the oven

3. If you’re using standard loaf pan, also use the amount in (), proof until it is to same height as the rim